WASHINGTON – The Federal Reserve plowed ahead with a fourth straight historically large interest rate hike Wednesday — an increase of 0.75 percentage point — in an effort to beat back soaring inflation.

But as the Fed’s monthslong campaign increasingly risks a recession next year, the main question now is – Will it dial back the rate hikes in December or wait until inflation shows clear signs of abating?

At a news conference, Fed Chair Jerome Powell said the Fed could slow the pace of hikes as soon as next month.

“That time is coming and it may come as soon as the next meeting or the one after that,” Powell said.

But he added the Fed isn’t close to pausing its rate hike campaign and needs to boost rates a good bit more to reach a level that’s “sufficiently restrictive” to lower inflation to the Fed’s 2% target. The concern, he said, is that inflation could become “entrenched” in the expectations of consumers and businesses and the Fed must move decisively to head off such a dynamic.

“it’s very premature to be thinking about pausing,” Powell said. “We have a ways to go.”

Citing recent high inflation figures, he added that rates could well rise above the 4.5% to 4.75% range that Fed officials previously anticipated.

The inflation numbers “do suggest to me that we may move to a higher level than we thought at the September meeting,” Powell said. “There’s no sense that inflation is coming down.”

In a statement after a two-day meeting, Fed officials said that in weighing future rate increases they’ll consider the large increases they already have approved and the typical lag between the Fed’s actions and their effects on the economy. Wall Street appeared to interpret that as a signal the Fed will soon reduce the pace of hikes, with stock rising sharply, but Powell downplayed that view. 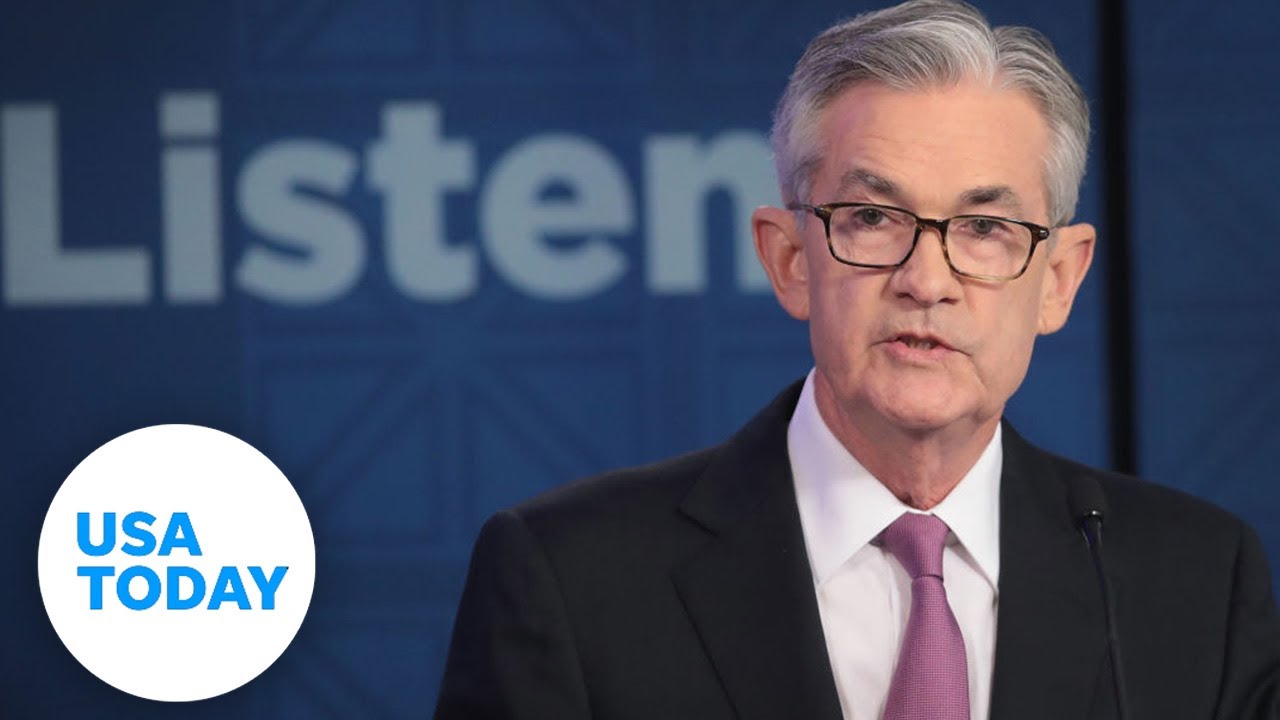 The Dow Jones industrial average shot up about 300 points, or nearly 1%, after the statement hinted at a possible rate hike slowdown. But after Powell doused that reading, the Dow was off about 50 points by mid-afternoon.

The Fed, as widely expected, raised its key short-term rate by three-quarters of a percentage point to a range of 3.75% to 4%, a decidedly “restrictive” level intended to fight inflation by further slowing an already wobbly economy. Since March, the Fed has hoisted its federal funds rate – what banks charge each other for overnight loans — from near zero, its most aggressive such initiative since 1980.

The strategy, along with inflation that’s still just modestly below the 40-year high reached earlier this year, is likely to tip the economy into a recession by next year, according to most economists surveyed by Wolters Kluwer Blue Chip Economic Indicators.

Wednesday’s move is expected to ripple through the economy, driving up rates for credit cards, home equity lines of credit and other loans. Fixed, 30-year mortgage rates already have jumped above 7% from 3.22% early this year. At the same time, households, especially seniors, are finally reaping higher bank savings yields after years of meager returns.

Is inflation going down from the Fed’s interest rate hikes?

Since the Fed’s last meeting six weeks ago, there have been some hints that inflation soon could ease. U.S. monthly job growth has fallen from 537,000 in July to 263,000 in September, though that’s still  solid number. And private-sector wages and salaries grew 5.2% annually in the July-September period, still historically high but down from 5.7% the previous quarter.

The most widely followed inflation gauge, the consumer price index, showed that overall prices in September were up 8.2% from a year earlier, down from  a four-decade high of 9% in June.

But those developments have been outnumbered by signs that inflation will likely drift down just slowly. The Fed’s preferred inflation measure, which excludes food and energy costs, rose to 5.1% in September from 4.9% the previous month. Consumers’ inflation expectations in one and five years – which often affect actual price increases — rose last month after falling previously.

And job openings surged from 10.3 million to 10.7 million in September after coming off record highs in the spring and summer. That could again put upward pressure on wages as employers compete for a pool of workers that’s still limited compared with the pre-pandemic level.

“We aren’t going to declare victory until we really see convincing evidence, compelling evidence that inflation is coming down,” Powell told reporters in June.

How high will the Fed raise interest rates?

Futures markets that predict where the Fed’s key rate is headed expect another three-quarters point increase next month and two quarter-point moves early next year before the central back pauses its rate-hiking campaign.

That would take the key rate to a range of 5% to 5.25%.  A fed funds rate rate over 5% almost certainly would trigger a recession, says economist Bob Schwartz of Oxford Economics. By next September, futures markets expect the Fed to trim rates to bolster a faltering economy.

What are current mortgage rates?

The current mortgage rates have eclipsed 7% for the first time in more than two decades leaving some Americans wondering whether to buy a home in this ever-changing housing market.

“Nobody saw this coming. We thought maybe a max of 5%, but not a 7% interest rate,” Nadia Evangelou, a senior economist and director of forecasting for the National Association of Realtors told USA TODAY. As a result, Evangelou said the realtors association has readjusted its forecast several times this year.

As a result of the Fed’s hikes, real estate markets have already been impacted by higher rates for several months and it is widely expected to continue well into next year, Ruben Gonzalez, chief economist at Keller Williams, a property tech real estate company told USA TODAY on Wednesday.

“As the Fed continues to combat inflation, the housing market will continue to slow as one of the most interest rate-sensitive industries. Homeowners’ equity levels are high because of the rapid appreciation, and mortgage default rates remain near all-time lows as markets cool,” Gonzalez said.  “We’re unlikely to see mortgage rates move down until the second half of next year but more likely not until 2024.”

Robert Dietz, chief economist for the National Association of Home Builders told USA TODAY that he predicts the Feds will ease up on interest rates no later than 2024 which will lead to a rebound in the housing industry.

“The market for 2023 will be weak until then,” Dietz said. “Home prices will remain high and supply will be low.”

Follow along for our coverage of today’s crucial interest rate decision:

What is the Federal Reserve system?

Ahead of the rate hike, it’s a great time to revisit what the Federal Reserve system is.

We often associate the Fed with Powell and the building located in Washington, D.C., but the Fed extends well beyond that. There are 12 regional banks located in Boston, New York, Philadelphia, Cleveland, Richmond, Atlanta, Chicago, St. Louis, Minneapolis, Kansas City, Dallas and San Francisco. Each bank has its own president.

There are 12 people responsible for deciding what to do with interest rates at every Fed meeting. Seven seats are filled by the Federal Reserve’s Board of Governors which includes Chairman Powell and six other people who were nominated by the President and confirmed by the Senate. The New York Fed president casts a vote on interest rates at every meeting. The remaining four votes come from a rotating cast of the other regional bank leaders.

Are we in a recession right now?

While two consecutive GDP contractions in the first two quarters this year met an informal benchmark for recession, the National Bureau of Economic Research looks at a broader range of economic activity, including employment, retail sales and industrial production, before determining when a downturn begins and ends. NBER is a non-profit, non-partisan organization that frequently publishes economic research. Within NBER is a team of eight economists tasked with determining when recessions occur.

Most economists don’t believe the U.S. is in a recession, citing slowing but still-vibrant job growth. There’s little doubt, though, that the economy is losing steam as households and businesses curtail spending amid soaring inflation and the Federal Reserve’s aggressive interest rate hikes aimed at tempering the price increases.

How to prepare for a recession

That said, it’s never too early to start thinking about how to prepare for a recession.

Try to put aside just enough so you can scrape by on a strictly bare-bones budget for three months in case you lose your job, said Brian Robinson, a financial adviser and partner with SharpePoint.

Also, consider putting off “nice to have” purchases. For instance, if your refrigerator breaks, get it repaired or buy a new one. But if the blow dryer you’ve owned for five years still gets the job done, just not as good as a newer one, hold on to it – and your cash.

Make sure to take inventory of all your monthly subscriptions and ask yourself which you could live without, then cancel those.

The Fed’s last meeting of the year will take place from December 13-14. Then the central bank will reconvene on January 31 for its two-day meeting. Here is the schedule of meetings for the rest of 2023:

The Treasury announced Tuesday that the rate on its inflation-protected I Bonds will fall to an annual rate of 6.89% for the next six months. Anyone can invest a minimum of $25 or a maximum of $10,000 each year.

Ahead of the Fed’s upcoming rate hike, the fed fund rate ranges between 3% to 3.75%. A 75 basis point hike would push the range between 3.75% to 4%. The fed funds rate is the interest rate banks charge to lend money to one another.

Rising rates increase consumer and business borrowing costs, which reduces demand for products and services broadly, leading suppliers to cut prices or stop raising them. But the immediate effect varies significantly across individual goods and services.

S&P 500 performance during the past five rate hikes

In all but one of the past five Fed rate hikes, the S&P 500 closed at least 1% higher. The most recent hike, which occurred in late September, was the exception. Leading up to the decision, the index was higher but fell immediately after the Fed announced the 75-point hike. In the final trading hours, the S&P 500 seesawed between positive and negative territory multiple times.

Here’s when the Federal Reserve hiked its short-term interest rate this year, and the amount by which it raised that rate.

What is inflation?:Understanding why prices rise, what causes it and who it hurts most.

What is a recession?:The economic concept explained and what happens during one.

What does it mean when the Federal Reserve raises interest rates?

When the Fed raises interest rates it becomes more expensive for banks to borrow money from one another. Banks pass on these higher rates to consumers by making it more expensive for them to get a mortgage, a loan, pay off credit card debt and more.

On the flip side, Fed rate hikes increase the interest you earn on money in a savings account.

How will stock react to the Fed?:Here’s how the stock market has moved with all 5 of the Fed interest rate increases

I Bond rates:Why I chose I Bonds to protect my sons’ inheritance from 40-year-high inflation

Nicholas Rossi: Man arrested on COVID ward in Scotland is American rape suspect who faked his own death, court rules